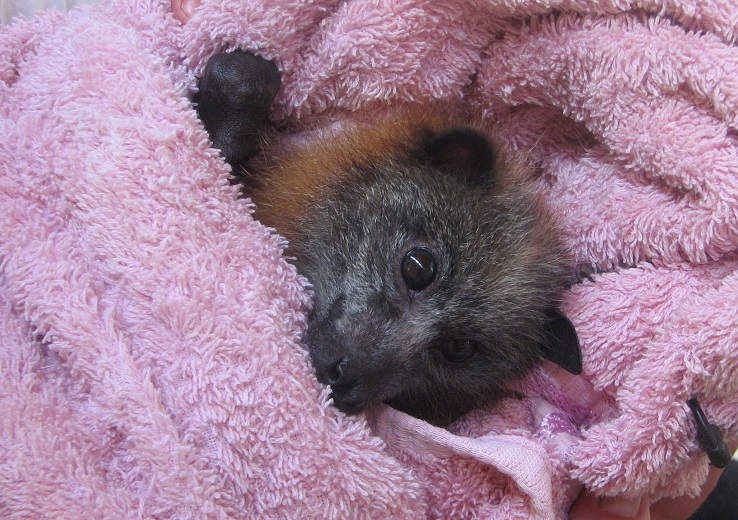 Bats, also known as flying foxes, are undoubtedly the most demonised and misunderstood native animal in Queensland.  They face challenges and hazards on many fronts – mostly related to human activity and human hysteria - yet these gentle and highly intelligent creatures are most deserving of our protection.

In 2008 the state Labor Government accepted the advice of its Animal Welfare Advisory Committee that shooting flying foxes was inhumane because of the small probability that they would killed instantly, given their small head size.  However, in 2012 the Newman LNP Government reversed these laws and introduced new laws sanctioning the killing of flying foxes, including two threatened species – the Spectacled and Grey-headed flying-foxes.  Ironically these new laws came into effect on Threatened Species Day.  The government now issues Damage Mitigation Permits to allow fruit-growers to legally shoot flying-foxes.

In amending the law to exempt flying-foxes from the humaneness requirements under the Nature Conservation Act, the government clearly showed its understanding that shooting of bats is not humane!  Its decision also showed it did not care about the suffering that bats would endure because of its policy.  This is a disgrace.  Queensland fruit growers are now permitted to shoot flying-foxes, despite the known high rate of wounding and prolonged suffering. There is also the added uncontrollable risk of orphaned flying foxes slowly perishing from starvation if the mother is culled.  Up to 10,500 flying-foxes can now be legally shot each year.  It is likely though that larger scale illegal shooting occurs.

The State Government announced in May 2013 that councils will be given the authority to manage ‘problem’ flying fox roosts in urban areas without having to apply for a government permit, as was previously the case.

Dispersing a colony greatly stresses the bats and is often unsuccessful.  Often the bats end up in places where they are more difficult to manage.

Despite this, more councils are electing to try the dispersal option for local bat colonies.  Perhaps they favour a quick fix method of allaying many people’s ignorant and unfounded fears about the threat of bat-borne diseases.  What a shame that they prefer to do this instead of educating their local communities about the very low threat of disease.

The reality is that if people do not handle bats they simply will not catch Australian Bat Lyssavirus, a very rare disease spread by bites or scratches from an infected bat.  The other disease associated with bats, Hendra virus, cannot be passed directly from bat to humans.  It is spread from bat to horse to human and there is now a vaccine for horses.  Anti-bat hysteria is not warranted in the slightest in terms of them posing a threat to our health.

While less than 0.1% of the bat population carries the Lyssavirus, they are more at risk when sick. The added stress of dispersals will only increase the strain on their immune systems, and potentially increase the number of animals carrying it. Ironically the fear of disease that is prompting these dispersals is actually exacerbating the chance of higher incidence of the disease.

Some community members also complain about the noise and smell of flying foxes.  For starters, if people don’t try to disperse them, they are much quieter!  To further reduce the noise and to reduce the smell for those times when it may be bothersome, people can try installing double glaze windows, closing the windows and turning the air conditioning on.

We look forward to more progressive councils and governments in the future showing leadership and encouraging citizens to have more tolerance for wildlife whose habitat is steadily shrinking.  Local communities should be given strategies for living successfully with flying foxes.

Unfortunately there is a lot of cheap netting available that puts our wildlife at risk. Bats, as well as birds & snakes, get entangled in the net while trying to reach the fruit, causing circulation cutoff, bruising, breaking of bones, wounds caused by skin abrasions. Often these wounds are so terrible that the animal needs to be euthanased, and mothers will often abort their foetuses under such stress.

I don’t want to hurt the bats, but I would like some fruit left for myself. What other options do I have?

I don’t own fruit trees, but I still want to help. Any suggestions?

Sadly many of our batty friends fall victim to electrocution due to increased habitat destruction leading to smaller roosts throughout urban towns, surrounded by power lines. Less than 0.1% of adults survive electrocution, and the vast majority of victims are mothers carrying babies.

That’s terrible. What can I do?

Barbed wire is often seen as a great deterrent for both unwanted human and large animal visitors. Unfortunately, other animals unintentionally fall victim to its efficient physical restraint. It is indiscriminate in nature, with many vulnerable and endangered species becoming hopelessly entangled, and dying a slow painful death.  Bats are not the only victim; macropods, possums, koalas and birds also fall victim.

That’s terrible. What can I do?

Killed or made ill by Cocus palms

Cocos palms (Syagrus romanzoffiana) may seem attractive in your garden, but can be deadly to our batty friends in several ways:

What can I do about it?

Bats face so many problems! How can I help?