Greyhounds are gentle dogs who would usually prefer to have a snooze on the couch if given the choice between exercising or sleeping. Sadly, these dogs are primarily regarded as a commercial resource and so when they race, too often they are running for their lives. If not up to speed – literally – these gentle animals very often pay the ultimate price.

Find on this page:
Overbreeding and wastage
A greyhound's racing "life"
What happens after racing?
Live Baiting
New greyhound tracks
Animal Liberation Queensland Position
What are we doing?
What you can do?

The greyhound racing industry is a breeding lottery for the fastest dog, with little regulatory efforts to curb breeding numbers; in fact, there are incentives in place such as increased breeders' bonuses. The overbreeding and the limited capacity for rehoming greyhounds is a key animal welfare concern.

Based on available industry data, about 17,000 to 18,000 greyhounds are killed in Australia (including named and unnamed dogs) each year due to underperformance, being non-chasers, injuries sustained during racing or as surplus dogs at the end of their short racing careers. 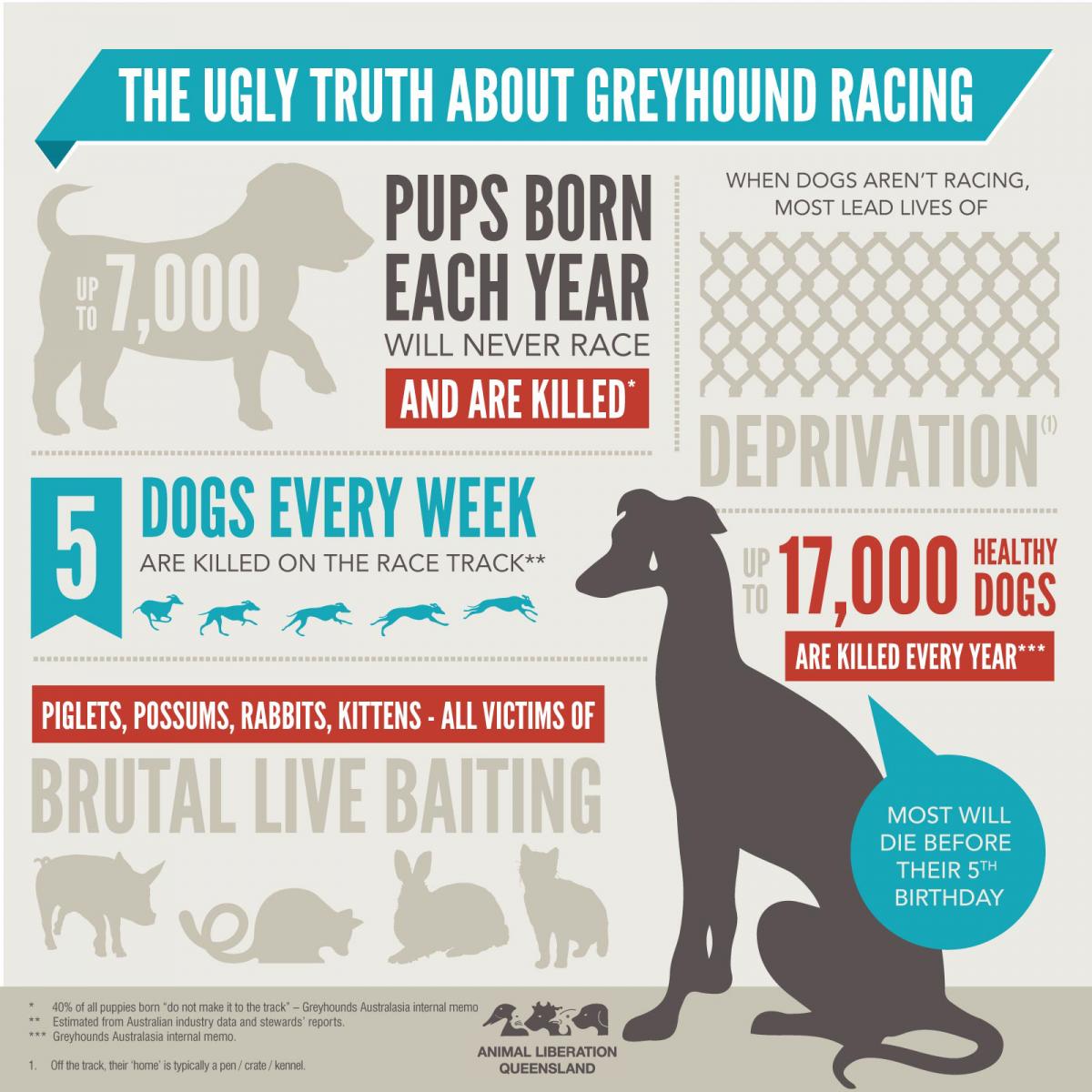 Greyhounds sustain injuries as a result of training and racing. Steward reports regularly include musculoskeletal injuries, including serious bone fractures and other types of injuries such as seizures (due to lack of oxygen) and cardiac arrests. Injuries necessitate suspension from racing, which has financial implications for owners/trainers. Many trainers will have dogs euthanased for economic reasons, despite having treatable injuries.

Off the track, their lives aren’t any better. Greyhounds are considered working dogs in sport for the purpose of animal welfare standards and are not afforded the same legal protection as companion animals. They are kenneled for most of the time when they aren't racing and are often kept muzzled.

What happens after racing?

Greyhounds’ racing careers usually end some time between 3 to 5 years of age. Information about their post-racing lives is limited, and there is a similar lack of transparent information about the large number of dogs that never make it to the track. However, what is known anecdotally is that the limited post-racing options include surrender to adoption groups, rehoming via the “Greyhound as Pets” (GAP) program or, for the vast majority of dogs, euthanasia. Most dogs euthanased are aged between 3 and 5 years and advice provided from Brisbane veterinarians and veterinary nurses supports this. Some veterinarians report euthanasing up to 5 healthy greyhounds daily.

Live baiting refers to the illegal practice of using live animals for the purpose of training (or "blooding") greyhounds. Investigations by Animal Liberation Queensland and Animals Australia reveal that live baiting is widespread and considered an acceptable training technique amongst dozens of Australian greyhound trainers. Investigators revealed footage of possums, piglets and rabbits being tied to mechanical lures before trainers released dogs to chase and ultimately wound, if not maul to death, the defenceless and terrified animals. Trainers were also documented tying up live rabbits to taunt dogs for training and breaking-in procedures. This cruelty was documented by Animal Liberation Qld in Queensland, and Animals Australia in New South Wales and Victoria and the investigations were aired on Four Corners on 16th February 2015. It exposed rampant live baiting in the greyhound racing industry.

The Queensland Government is currently supporting the development of a new $40 in Ipswich. Voice your opposition to this new proposed track today.
ALQ is currently campaigning to stop this track going ahead and working alongside several other animal protection groups.

ALQ is opposed to the use of greyhounds in racing because of significant animal welfare issues. Greyhounds are bred specifically to race and the industry is profit-driven so this places potential financial gains over the welfare of the animals. Greyhounds often suffer injury, pain and distress as a result of racing and the absence of independent oversight of the industry further intensifies our concerns. ALQ also has concerns regarding gambling and the associated financial and family burdens. We also believe that this industry should not be subsidised by the government nor supported by business and we are strongly opposed to the construction and expansion of racing tracks. ALQ supports a ban on greyhound racing in Australia.

What you can do?