Smithers never made it to Christmas

Animal Liberation Qld’s greyhound campaign has been a strong focus in 2014 and we have raised awareness of greyhound exploitation in many media stories. As the year draws to a close, we’d like to share the very special story of Smithers, a rescued Queensland greyhound. What happened to Smithers exemplifies all that is wrong with the industry and explains why the fight must continue to end the industry altogether in Australia.

Three year old Smithers was in a highly anxious state when rescued. Placed in foster care, he was terrified of everything in the beginning – tree branches, hanging plants, even supermarket groceries being unpacked. It was as though he saw demons in everyday objects. He would drop to the ground and curl up in fear if unsettled by something.

Poor Smithers had been doped in his racing period and his anxiety was due, at least in part, to steroid addiction. His vet had no doubts that Smithers’ frail, thin skin, as easily bruised as an octogenarian’s, was the result of steroid doping. Smithers most likely suffered an injury during his racing years and was pumped full of steroids to mask the pain of his lameness.

For his first fortnight in foster care, Smithers didn’t want to move from the bathroom. He went rigid with fear if anyone attempted to take him for a walk. He would tolerate being patted but never wagged his tail and was certainly not affectionate.

But at 4am one morning, his foster carer, Bobby, heard Smithers come to her side of the bed.  In the darkness, she patted him and when she fondled his ears, she finally heard the sound of his tail wagging. Throughout the next day he was still aloof, but again at 4am the following morning, he appeared at her bedside for a pat.  And so began a new routine, with Smithers taking his first steps towards trust.

Unfortunately, Smithers was soon diagnosed with Lupus, an auto-immune disease. A crusty nose and crusty pads on his paws were the give-away symptoms. His vet immediately suspected that his steroid regimen had given him Lupus. Greyhounds are not on the list of dog breeds which are genetically prone to Lupus. However, they are at the top of the list of dog breeds likely to be drugged with steroids, and Lupus can be brought on by depression of the immune system and by drugs.  Smithers began medication for his Lupus and continued to come down from his drug addiction.

About nine months after his rescue, Smithers was finally beginning to enjoy life more. He had become braver and could finally ‘chill’. Although never playful, he appeared content. Smithers was even confident enough to attend the first Animal Liberation Qld protest against the Cronulla Park Greyhound Racing track at Logan in 2012. 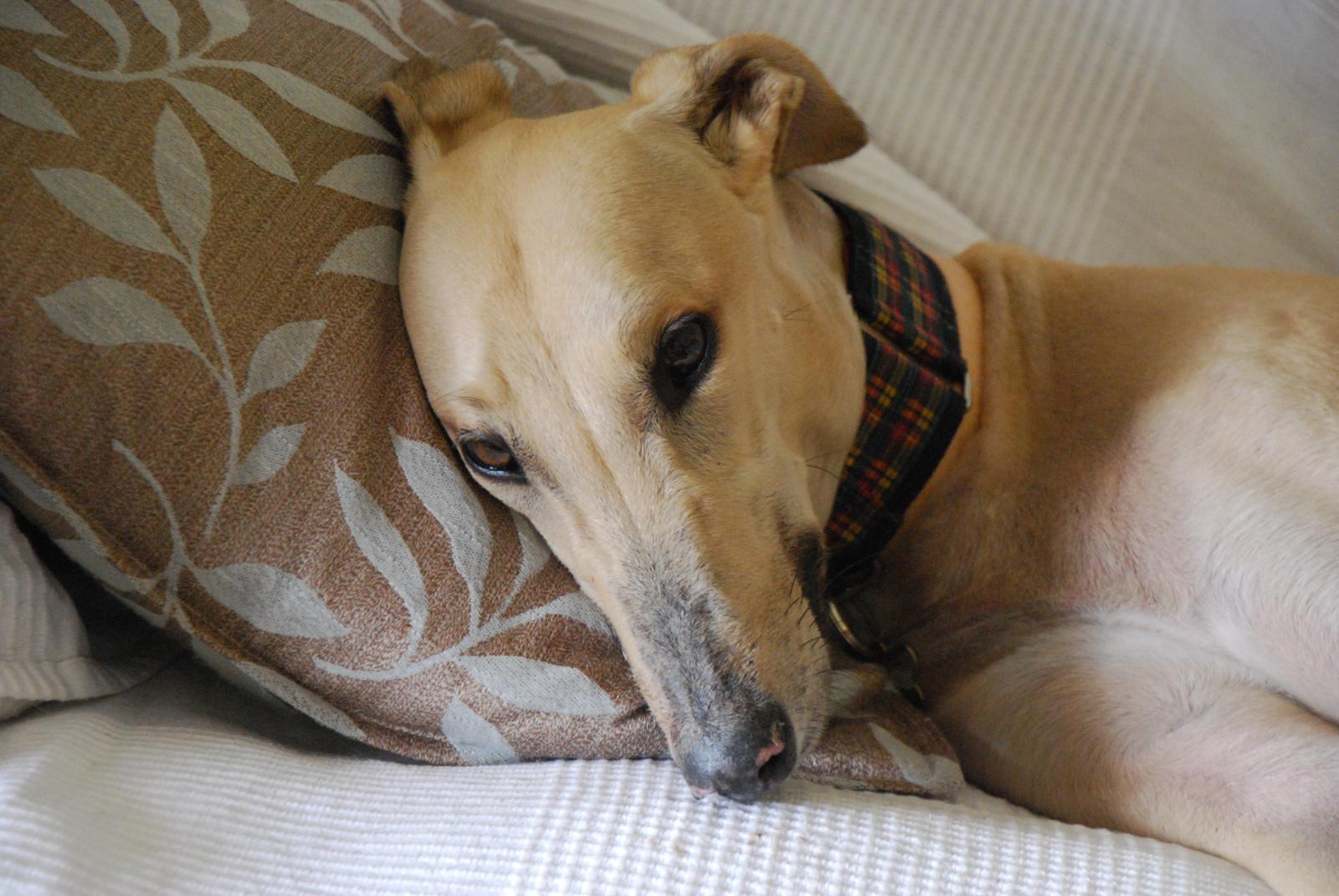 Sadly, this happy period was short-lived.  Blood tests showed that Smithers’ kidneys were failing. The most likely explanation is that Lupus, itself brought on by drug abuse, then destroyed his kidneys.

For six months Smithers enjoyed a good quality of life. But then he started to become lethargic and disinterested in food.  He wanted to be by himself once more. Even worse, he became fearful again – peering anxiously behind hedges whilst on his walks and staring up at light fittings as if they presented some awful peril to him.

One morning Bobby decided to take a photo of Smithers lying with his head on a pillow. When she studied the image, she saw her still-handsome boy, but she also saw a deep sadness and deep suffering in his eyes. She knew then that it would be wrong to prolong his life.  Later that same day, shortly before Christmas, Smithers was humanely euthanased in his own loving home.  He was just four years old.

In a kind society, every dog would live out its whole lifespan as a beloved pet. As man’s best friend.  Please help Animal Liberation Qld’s fight to make sure that greyhounds now and in the future get the respect they so deserve.

We have big plans for our greyhound campaign in 2015 and with your generous support, we will have additional funds to broaden our campaign and our investigations. We know that everyone wants a more compassionate world for animals, so please help create that better world by giving generously to our Christmas greyhound campaign appeal. Dogs just like Smithers are depending on us all.