Over 664 million chickens are slaughtered each year in Australia, enduring a short, miserable life in confinement – typically crammed in dark sheds with tens of thousands of other chickens. They cannot express natural behaviour, such as spreading their wings and bathing in dirt.

Chickens are slaughtered between 6-8 weeks of age, at around 3kgs. Normally it would take a chicken 96 days to reach 2kgs. Now, with the use of selective breeding combined with artificial lighting, overcrowding and drug use to accelerate rapid growth, chickens can reach this weight in just 35 days.

Rapid growth results in skeletal and metabolic disorders which cause suffering, pain and death. 90 per cent of chickens have a detectable abnormal gait at the age they are slaughtered. Accelerated growth can also lead to sudden death syndrome through acute heart failure. This occurs in 1-4% of chickens. Of the half a billion farmed in Australia each year, that's up to 22,053,572 chickens who die of sudden death syndrome. 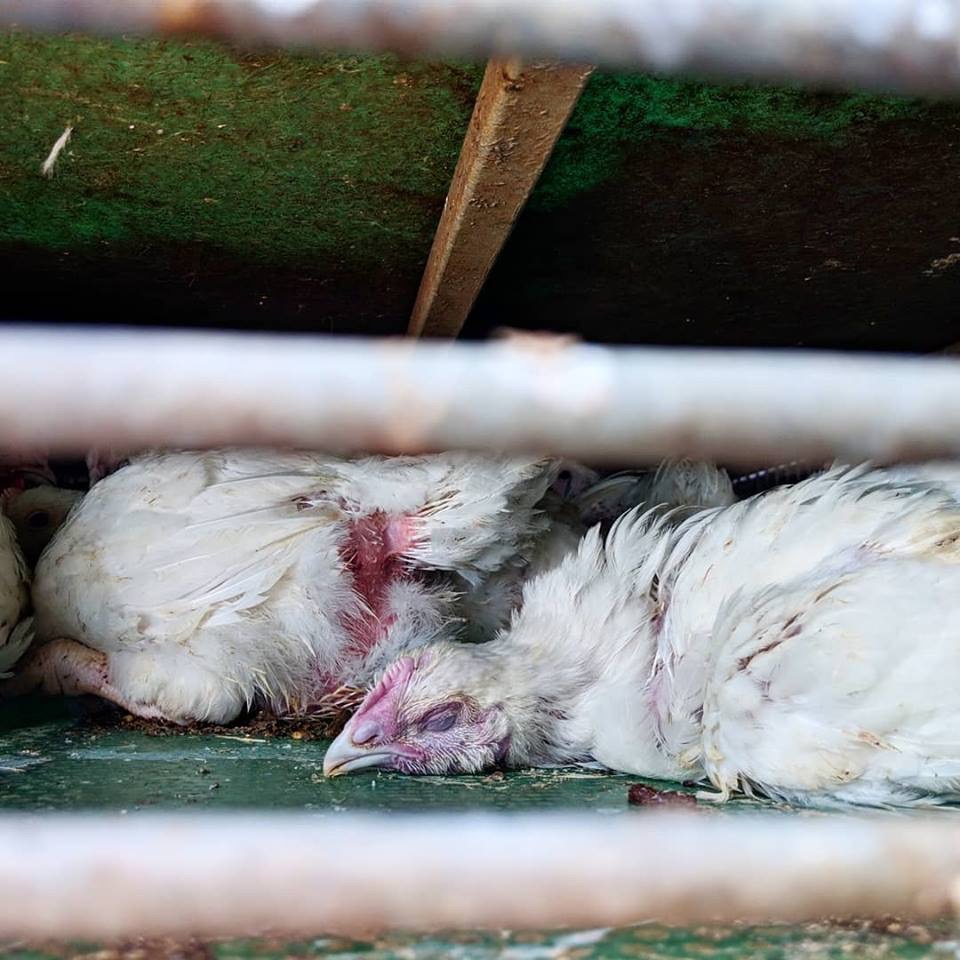 A young chicken who died on the way to the slaughterhouse. Inghams in Brisbane.

The Australian Model Code of Practice for Domestic Poultry provides no protection for meat chickens – rather, it assists the industry providing exemptions from prosecution. This means practices such as feeding dead chickens to other chickens, and sheer neglect, are believed to be commonplace.  An example of neglect in Victoria (Tip Top Livestock) saw more than 86,000 chickens across six sites starved to death while those who survived had resorted to cannibalism, showing signs of distress, lameness and parasitic disease, as reported by the Herald Sun in 2015. No jail time was served.

Most chickens in Queensland are subjected to CO2 stunning prior to being slaughtered. They are passed through giant gas chambers before having their throat slit. This causes acute pain and suffering.

Slaughterhouses who use electrical stunning will hang the chickens upside down on a conveyor that typically leads to an electrified water bath before reaching the blades which cut their throat. From here they proceed into a scalding tank to loosen feathers before plucking. As some chickens will lift their bodies to avoid the electrical bath, there are cases where chickens are still conscious when they reach the blade and scalding tanks.

The natural lifespan of a chicken is 8-10 years. Compare that to the 35 day lifespan  of a broiler chicken, the entirety of which the chicken cannot express themselves or live any kind of meaningful existence. Chickens are recognised to display intelligent, complex behaviour, are very social creatures, and have distinct ways of communicating with one another. They can recognise individuals and studies have shown they worry about the lives of their fellow chickens and the future itself (and in modern-day Australia, for very good reason).

•    Write to supermarkets and fast food chains about the cruelty of chicken farming, and ask them to stop stocking cruel products and start stocking more vegan alternatives