After dozens of horses on one property have been left to slowly starve to death, we raised concerns over the remaining horses and pushed for animal cruelty charges to be laid. In August 2020 it was finally announced that the man responsible was being charged with animal cruelty. He pled guilty in court on 27 April 2021.

Terence Oberle pleaded guilty in Toowoomba Magistrates Court today. He was fined $20,000 (referred to SPER) and is restricted from owning horses (except for 6 currently in his possession).

In our view, people like this should never be allowed to own or be responsible for any animals ever again. He should have been given a life ban by the courts years ago, which would have spared these horses this tragic fate. It is important that animal cruelty cases like this are taken seriously and that more cases of cruelty are prosecuted in order to provide a deterrent to others. The court should have imposed a ban on owning or being responsible for any animals for life. The fact that he is allowed to keep 6 horses and to have cattle leaves us with grave concerns for those animals.

Authorities have charged a man with offences under the Animal Care and Protection Act 2001 in August.
Terence John Oberle appeared at court in Toowoomba on 21 September but the matter was adjourned until 19 November. Read more here.

Authorities completed their investigation into the starved and neglected horses. After 6 months they have still not charged anyone and say they are now awaiting legal advice. This is what happens when you have the Department of Agriculture responsible for enforcing animal welfare laws. Read more here.

Three horses were loaded and moved from the property on Friday morning, including one extremely emaciated ex-racehorse (Flag Flamenco), another emaciated horse, and another horse in poor condition. Biosecurity Queensland (BQ) has cleared the horses for travel despite their poor condition - a condition that would be prohibited under the Transport Code unless specifically approved by a vet.

Animal Liberation Queensland was on site on Friday morning to monitor the loading of horses. We were hassled by BQ inspectors who threatened to have us charged just for being there, despite having the property owner's permission. Police threatened to arrest us as well and appear to have made no enquiries as to whether the horse-owner or BQ inspectors had the authority to be on the land.

It appears these horses have either been moved at the owner's request or to assist the government with managing this PR disaster. While the investigation is still "ongoing", no charges have been laid, and we don't believe they ever will be.

The remaining horses were moved today to an undisclosed location where it will be impossible to independently monitor their welfare. Their welfare is now in the hands of someone with a long history of animal cruelty and neglect, and someone who has allowed more than 30 horses to slowly starve to death, and 8 others reach a poor state of health.

We will do everything we can to locate all remaining horses and follow up with authorities as to the final outcome of this "investigation".

Investigators from Animal Liberation Qld and Coalition for Protection of Racehorses attended the site in the Gowrie Mountain area just outside of Toowoomba yesterday to observe the horses from the fence line and find out more.
We returned one week later to check on the horses and scan the bodies of the dead horses. We identified that 5 of the dead horses were racehorses, with one still listed as 'Active'. See media release:  ‘Active’ racehorse among corpses at Toowoomba property

We have grave concerns for these 8 horses who have witnessed their friends starve to death. The surviving horses are still not being adequately fed. Witnesses reported only a very small amount of feed is now being given once a day, and it is unclear how often Biosecurity Queensland inspectors are visiting the property to check on the horses and ensure adequate feeding.

The bodies of their friends still remain on the property, slowly decomposing. [Update: these horses were eventually buried in early February] 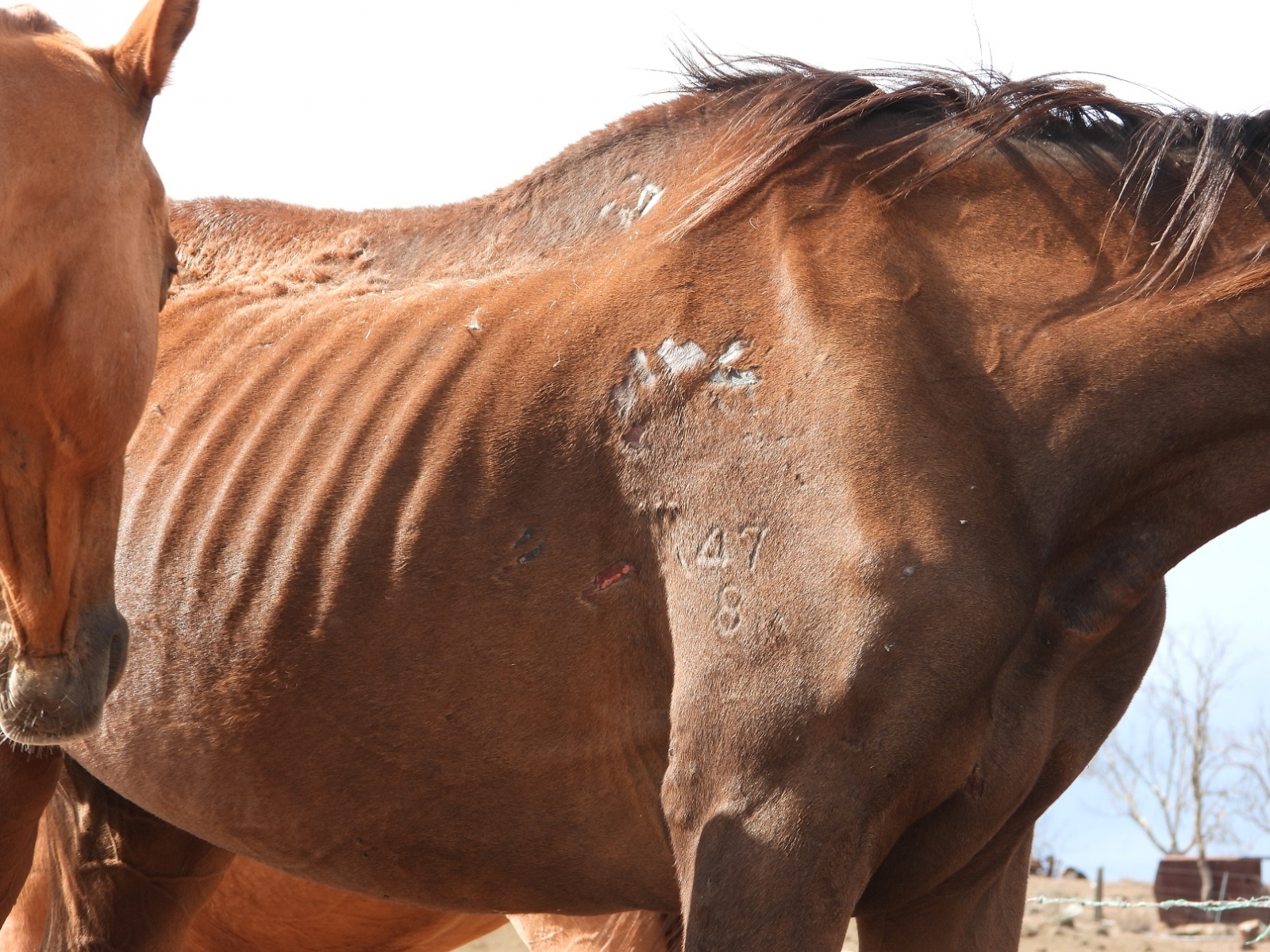 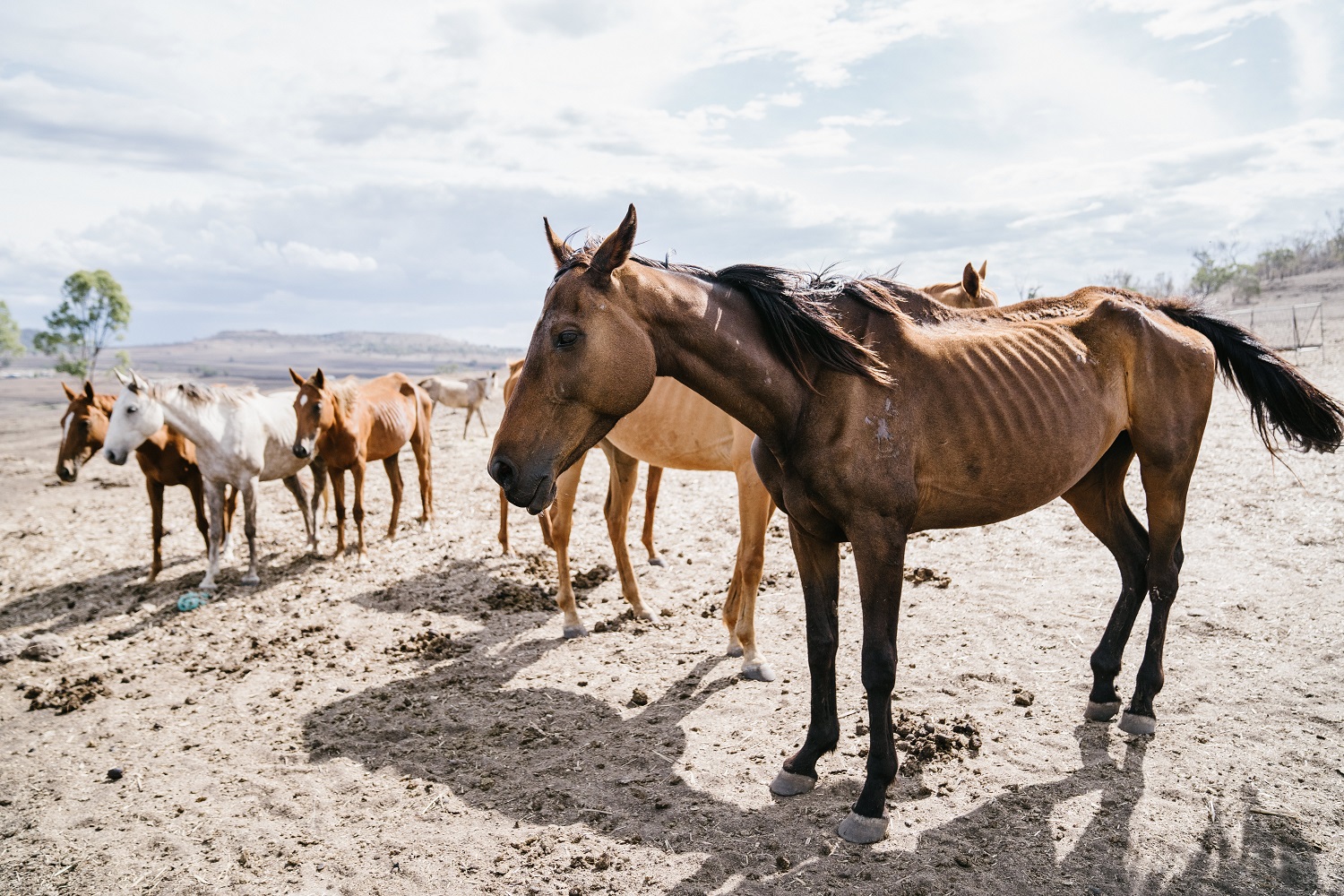 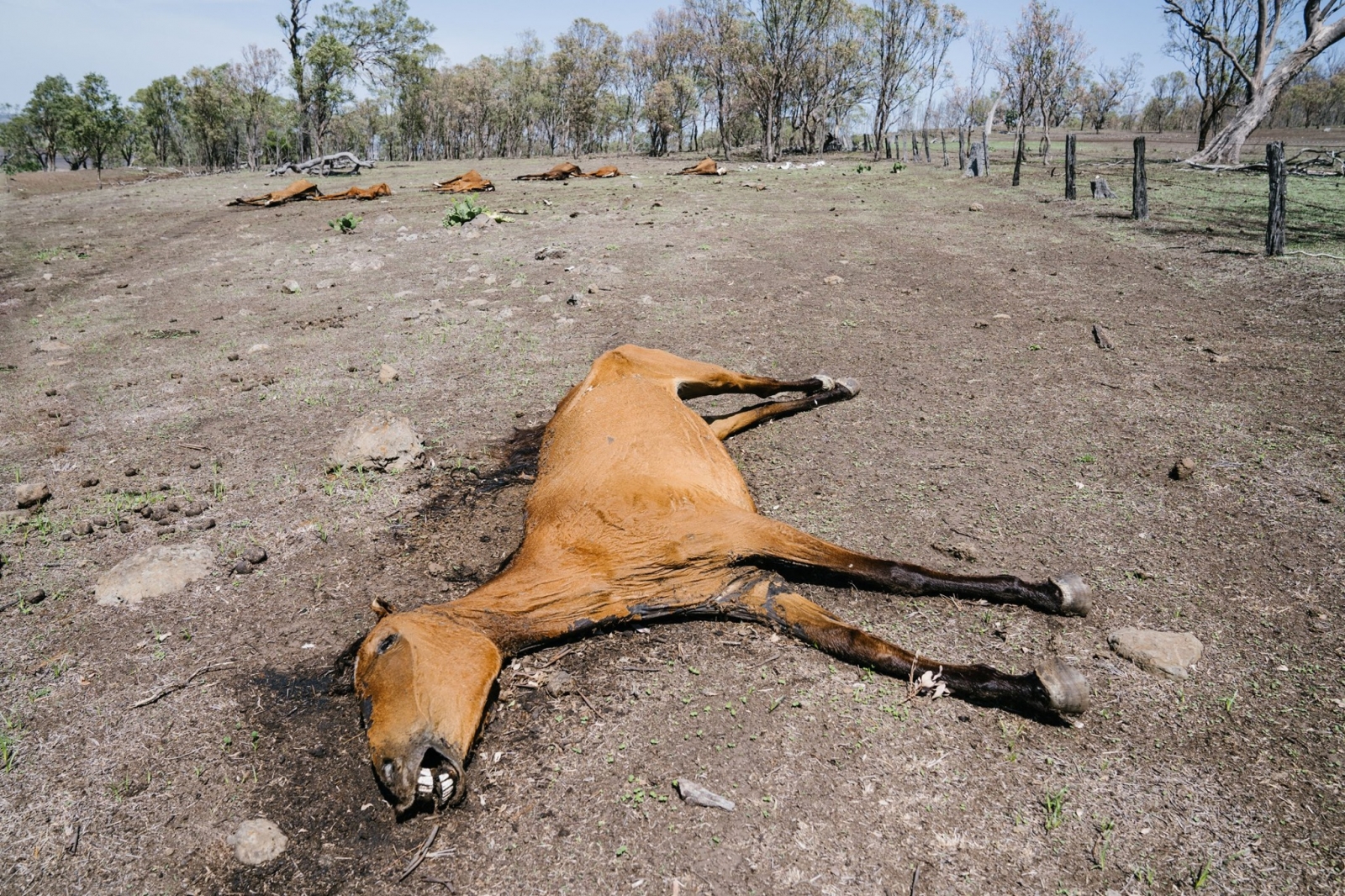 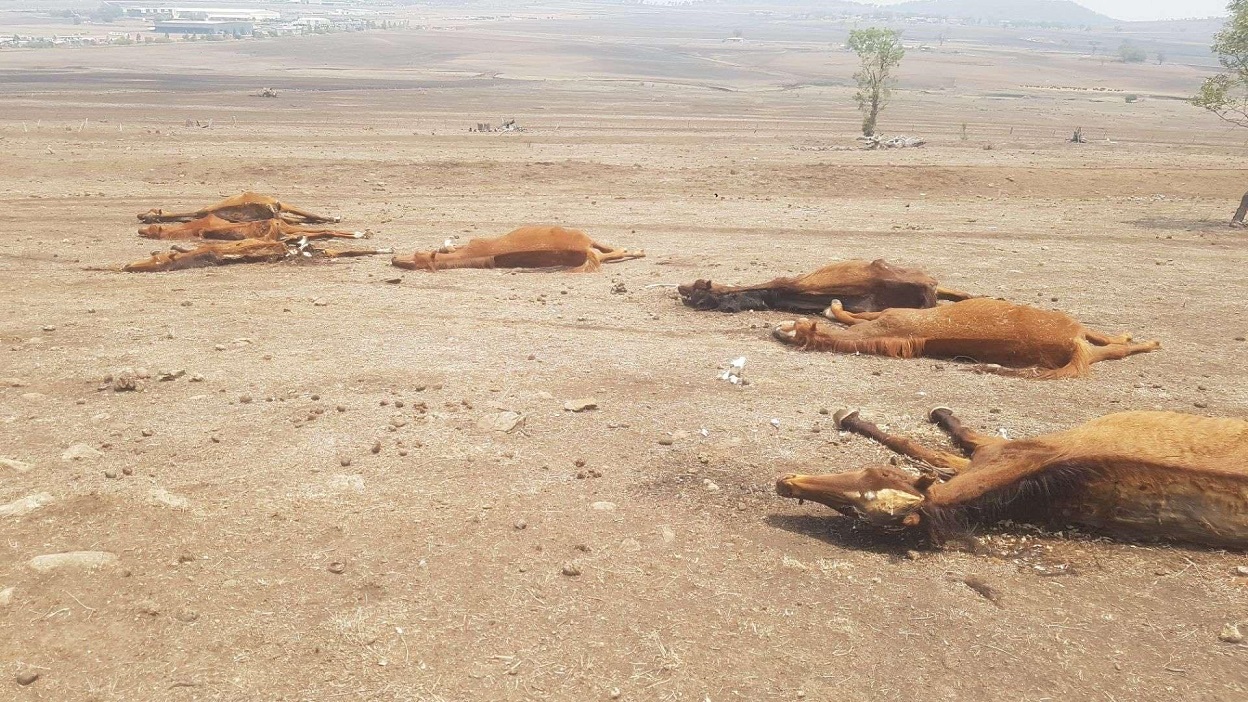 Read more regarding the Toowoomba horses in the various media reports:

The Department's Biosecurity Queensland has a poor track record of prosecuting cases of animal cruelty where cases related to farmed animals or 'livestock'. Some of the following cases are all places where extreme animal cruelty and violations of existing codes have been recorded and complaints lodged, however, no prosecution made by authorities: